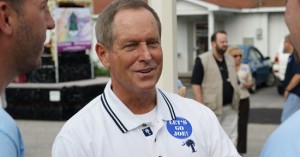 Joe Wilson has dedicated his life to public service—serving his family, his community and his country.

Born in Charleston, South Carolina, Joe attended the High School of Charleston before receiving his undergraduate degree from Washington & Lee University in Lexington, Virginia. After graduation, Joe earned a law degree from the University of South Carolina. He joined a small law firm and worked as a real estate attorney in West Columbia.

Joe learned the value of public service early, serving in the offices of Senator Strom Thurmond and Congressman Floyd Spence. In Washington, he also served in Ronald Reagan’s administration as a Deputy General Counsel in the Department of Energy under Secretary (and former South Carolina Governor) Jim Edwards. He also served for 17 years as a member of the South Carolina State Senate and was the first modern Republican to be elected Chairman of the Senate Transportation Committee.

Passionate about serving his country, Joe retired from the Army Reserves and South Carolina Army National Guard after 31 years of service as a Colonel in 2003. His love of our military can be seen in his sons—all four of whom have served in our military overseas. He has steadfastly supported our military personnel and their families.

Today, Joe serves as a member of the House Foreign Affairs Committee, where he is the Ranking Member of the Middle East, North Africa, and International Terrorism Subcommittee and a member of the Europe, Eurasia, Energy, and Environment Subcommittee. Additionally, Joe serves on the House Armed Services Committee where he is a member of the Subcommittees on Readiness and Strategic Forces. Since the 111th Congress, he has been appointed to the highly influential Republican Policy Committee. He serves as Chair of the Bulgaria Caucus and the French Caucus, as well as Co-Chair for the Slovak Caucus, Morocco Caucus, and UK Caucus and is a founding member of the EU Caucus. He is a also member of the Americans Abroad Caucus, amongst many others.
Joe is committed to the fight for conservative values in Congress. He works closely with fellow members of Congress to promote a strong national defense promoting peace through strength, creating jobs, and limiting the size and scope of the federal government.

With his wife Roxanne, Joe is the proud parent of four Eagle Scout sons and grandparent to eight grandchildren.